Charming, eloquent, well-read, and an avid art, gem, and manuscript collector, Lorenzo de’ Medici was also the consummate statesman and a definite “furbo,” the Florentine compliment for someone with high native intelligence and street sense. When Lorenzo was just a teenager he was astute enough to suspect an ambush set for his father on the road to one of their country villas, and to prevent his father’s assassination.

As beautiful as was his younger brother Giuliano (see post 10/19), Lorenzo was not. His nose was long and twisted to the side, and his jaw jutted out. His near-sightedness left him squinting. But he made up for all that with charisma—Lorenzo completely captivated most of Florence with his wit and ability to befriend both rich and poor. They called him il Magnifico, Lorenzo the Magnificent.

He was a poet, philosopher, patron of artists and scholars, a celebrated horseman, falconer, and hunter. His inner circle of friends were writers, philosophers, and connoisseurs of literature. It was like THE book club.

Each November 7th, Lorenzo threw a birthday celebration for Plato at Careggi, one of his many country villas. There he and his friends—the best and brightest of Florence—enjoyed lavish feasts and toasted the ancient philosopher, recited and discussed his writings, and promised one another to forward humanity with elevated, intellectual, and, therefore, virtuous thinking.

In many ways, Lorenzo was the personification of Plato’s concept of a philosopher-king—embodying not only Florence’s realpolitik but its culture. He and his grandfather, Cosimo, are probably the two men we could most credit with starting the Renaissance by their nurturing and tangible patronage of artists and humanist thinkers. Lorenzo also spread Florence’s revolutionary humanism and art by “loaning” masters such as Botticelli and Michelangelo to competing kingdoms to strengthen ties between the two city-states—brilliant acts of cultural diplomacy. He established a library and was an accomplished and very diverse poet himself.

Even in his most elegant poetry, Lorenzo was a clever “furbo,” writing in his native Tuscan Italian rather than Latin to make it more accessible to a larger readership. He penned a stunningly wide variety of genres—highbrow sonnets, canzoni, sestine, and pastoral, allegorical narratives as well as bawdy carnival songs. He could be satirical as well as reverential. His subjects included mythical romances, Dante, hunting parties, nature, and village lasses dancing. He even wrote for Ginerva, praising her character and virtue.

Lorenzo also was rather renowned as a courtier of women. Before Giuliano-Simonetta, there was Lorenzo and Lucrezia Donati. Lorenzo hosted and rode in a massive joust in 1469 to celebrate his engagement, but the Queen of the Joust was not his bride (who was still in Rome at the time) but his beloved Platonic Muse, Lucrezia.

Let me take a moment to explain Neoplatonic philosophy. Because it is very important to Ginevra’s life and DA VINCI’S TIGER. Back then the term “platonic love” had a much deeper, complex meaning. Neoplatonic philosophy held that a woman’s graceful, physical beauty was evidence of deep inner virtues. It was a Christian twist on Plato’s “pagan” concept that tangible things were reflections of greater truths, like the shadows cast against a cave wall by a fire which Plato discussed. Riffing off that, Renaissance philosopher and Medici friend, Marsilio Ficino proposed that: A beautiful woman represented universal beauty, or goodness. Therefore, a lovely woman could be a Platonic, spiritual muse who could save a man’s soul. If he could love, without physically acting on his passion, it would in essence replicate Christ’s unselfish love for us and allow the man to really consider and understand the meaning of virtue.

So...Lorenzo de’ Medici and his circle proclaimed that a man grew closer to God by gazing upon and contemplating such a woman, devoting himself to celebrating her publicly in a nonphysical love affair. Commissioning poems, works of art, discussing her inspirational qualities at state dinners. Such courtship ennobled the platonic lover. He would be seen as the epitome of chivalry and high-minded devotion.

Florence ate up these relationships—first with the Medici brothers and then with Ambassador Bernardo as he romanced Ginevra with commissioned poems and her portrait by Leonardo da Vinci.

Now, if I had to choose between the two brothers as my own Platonic Muse, I think it might just be Lorenzo. 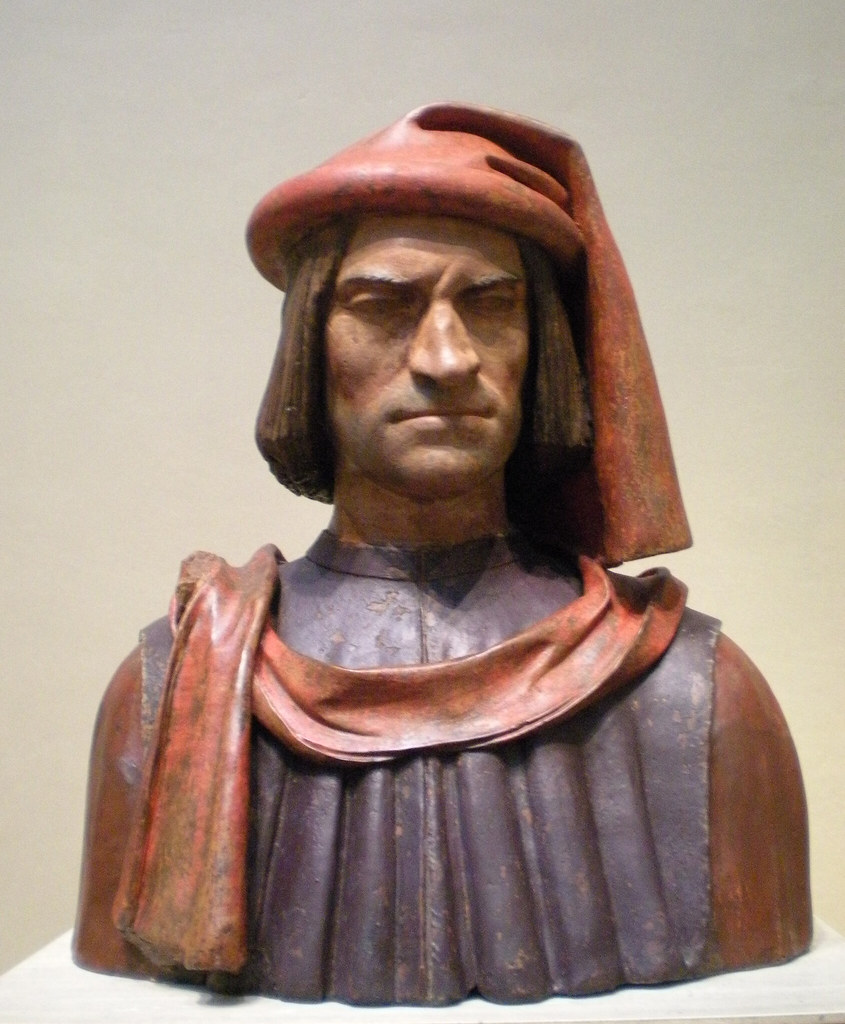