Anniversary of the Joust

January 29th marks the 541st anniversary of the 1475 Joust in Santa Croce, Florence. This expensive and dangerous spectacle was thrown by the Medici family to commemorate Florence’s recent alliance with Venice—and it is also the location for the first chapter of Da Vinci’s Tiger!

Giuliano de’ Medici, the prince of youth, was the much beloved and favored contender. He paraded through Florence’s street on his trusted steed Orso (and then onto the jousting field) flourishing a banner painted by the famed Botticelli. Following Giuliano and the other competitors were trumpeters and men-at-arms.

A joust was a competition between two horsemen wielding heavy lances with blunted tips. The two horsemen would gallop towards each other, with the goal of striking their opponent. Additional points were awarded for breaking a lance on your opponent’s shield/armor or unhorsing him. The number of “passes”—or gallops up and down the field—varied from joust to joust, sometimes as low as three passes, and sometimes as high as twelve. The riders were separated by a “tilt”—a wooden barrier or fence designed to prevent collisions and to keep the combatants at an optimal angle for breaking the lance. While there is not conclusive evidence, it seems the Italians invented the tilt.

Specialized jousting armor became popular in the late 15th century—right around the time of Da Vinci’s Tiger. Jousting armor was actually much heavier than suits of plate armor intended for combat, and could weigh as much as 110 pounds. Jousting armor did not need to permit free movement of the wearer like battlefield armor did—the only limiting factor was how much weight your horse could carry! 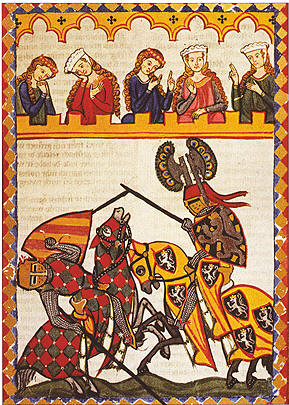 Jousting was highly popular in Italy thanks to the financial investments of the Medici family, but was enjoyed across Western Europe. Originally designed for military training, jousting quickly became a form of popular entertainment. Jousting tournaments were highly formal events, the stands full of courtly spectators. Medieval heralds promoted jousts through poems and songs, and the most successful jousters could receive gifts of money, land, and titles—almost like a professional athlete. By the 14th century, many members of the nobility had taken up jousting to showcase their own courage, skill, and talents. Jousting tournaments were often merged with magnificent pageants and state occasions—often following marriages or treaties between kingdoms.

Jousting was also a highly dangerous “extreme sport.” —many riders died from broken necks or were blinded by splinters piercing their eyes. That being said, jousts were also regulated in keeping with courtly ideals of chivalry. It was considered dishonorable to exploit an opponent’s disadvantage, and knights would often seek to gain honor by fighting against the odds—sometimes to the point of avoiding any sort of position of advantage.

Jousting began to decline with the invention of the musket firearm in 1520—the skills required of military heroes changed as technology advanced. However, even during the early years of the Renaissance, armies were becoming more and more focused on infantry divisions—making jousting a sort of nostalgic event to honor the ideal and chivalric warrior.

Jousting has long been featured in literature—and I was so excited to have an excuse to include one in my most recent novel!